Nothing turns off Twitter users more than a plain egg avatar where your profile photo is supposed to appear. Twitter is one of the most individualistic social networks around, and a generic profile could only mean three things: your account is inactive, a fake, or just not worth following.

Most Twitter users know that an egg resembles a big, fat zero, so they choose their profile photos carefully. Even at Zoomshift, a time clock app, we recognize the importance of a good profile picture.

Yet, not everyone utilizes their cover photo as well as they should. This is such a waste of valuable space. The header occupies a prominent place in your Twitter timeline and could be used to convey something you think your followers should know. For one, Twitter headers have different dimensions (500 x 1500 pixels versus Facebook’s 628 x 1200 pixels), so you’re a bit limited in terms of vertical room while enjoying more space horizontally.

The limited space for cover photos could prove to be challenging for many people. However, the business accounts we’re featuring today have mastered the art of the Twitter header. Here are 21 amazing Twitter header templates to design and inspire. Netflix is really good at utilizing its header space. They usually promote their latest original shows on their cover photos. In addition, their international accounts have different headers that are relevant to their respective audiences.

If you’re looking for great Netflix recommendations, you don’t need to scroll down their Twitter timeline. Your next favorite Netflix show might just be right there on the header. Chloé, a high-profile fashion house in France, lets its clothes speak for itself. The logo it uses on its Twitter profile is a faint shade that is barely visible. The well-dressed models on its profile photo attract all the attention. For British Airways, flying is more than just the shiny giant jets. Sure, their cover photo is dominated by the passenger plane and its very long wings, but you also won’t miss the ground crew working on the plane.

The Twitter header tells a story. Behind every successful flight, there are at least a dozen people on the ground making sure that British Airways planes are in tip-top condition. If you’re a potential job candidate or a customer, you’ll like the company’s “people first” approach. The popular project collaboration tool Basecamp is in the middle of a rebranding that started last August. Their old logo, which featured a smiling mountain, was transformed into something a bit more serious. The mountain is still there, but the smile has turned into a line graph that trends up. Etsy’s Twitter header is just a sample of the many different things you can find on the ecommerce website. If you’re into arts and crafts, you’ll find something you like on Etsy. From intricate metalwork-and-enamel flowers to cute whale plushies, Etsy users let their imagination run wild. UNICEF is one of the world’s largest non-governmental organisations. As their name suggests, they serve one of the most underserved sectors of society — children, particularly those who suffer from hunger and illness. UNICEF’s Twitter header puts their advocacy front and center.

The images UNICEF uses reflects their brand and mission statement. Wherever there’s a sick or hungry child, UNICEF is there to help, and they could use some help from you too. A business’s Twitter header is a great space to promote its marketing campaigns. It’s also a good place to promote its advocacies. Vodafone used its Twitter cover photo to celebrate International Women’s Day with the theme “I Am The Face Of Tech”.

Tech industries such as telecommunications are still dominated by males, but Vodafone pays tribute to the women working in the industry by putting a woman of color on its Twitter header. It appeals to two different markets at the same time by saying that gender or ethnicity should not keep one from making a difference in the world of technology. Baby boomers once associated Old Spice with their grandfathers. Now, it’s the best-selling body wash among men aged between 18 and 35. Their secret? Appealing to men’s inner adventurers while tickling their funny bones at the same time.

If you’ve seen their ads starring Isaiah Mustafa, nothing will surprise you about their Twitter cover photo anymore. It takes all the cliches associated with being a man of adventure, like muscles and sharks and tattoos. and combines them with over-the-top imagery, like helicopters shooting laser beams and lions eating corn dogs. It’s powerful and fun, just like Old Spice. Lyft is widely known for its ride sharing platform that competes with the likes of Uber. But their latest Twitter header shows that you can get more than just a car going home. Lyft is going all-in with its Lyft Bikes service. You can rent an electric bike in selected cities, go around with friends, and discover hidden corners that you’ve never explored before.

Lego is known for its themed collections, and its current Twitter cover photo couldn’t be any simpler. Take some Lego mini-figures in action poses, add some of Lego’s iconic pine trees, and you have an instant winter skiing scene!

The toy brand is also giving the LGBTQ community a shoutout by adding rainbow bricks to its cover photo. This is not just a cheap gimmick. Lego has been a very vocal supporter of LGBT causes, even creating the world’s tiniest Pride parade last year. It sends the message that Lego, just like love, is for everyone. LinkedIn’s Twitter cover photo is reflective of their target demographic. LinkedIn is a platform where users can promote their own businesses. Whether you are a small business owner, a remote worker, or a creative, LinkedIn lets you find and make connections that can change your career. The Wendy’s Twitter account is known for roasting people and firing shots at competitors. Following an incident where a Twitter user claimed that McDonald’s breakfast meals were better, Wendy’s changed its cover photo to one featuring its breakfast sandwiches and coffee, proclaiming that it’s going to be America’s favorite breakfast.

Of course, in true Wendy’s fashion, they added a disclaimer: “They just don’t know it yet.” All in a day’s work for one of the most brash and amusing corporate accounts on Twitter. One can’t help but wonder what makes Taco Bell’s Twitter header amazing. Is it the fun, bright colors? The fact that it looks similar to its Facebook cover photo? The clean, simple lines?

Maybe it’s the tacos. Yes, it must be the tacos. Taco Bell’s cover photo makes us want to go out and get tacos right now. If it doesn’t make your stomach grumble, we don’t know what will. The Spotify tagline promises “music for every mood” and it delivers just that. You can enter what you’re feeling right now on your Spotify app and it will suggest songs, artists, or playlists for you. It lets you discover new music and plays familiar tunes. Whether you’re in the mood to party or just sit by the window and watch the snow falling down, Spotify has the perfect music for it.

Spotify’s Twitter header is minimalistic and uses the app’s iconic Lineto Circular font to be consistent with the app itself. It’s a no-frills header that works because it says what it does. 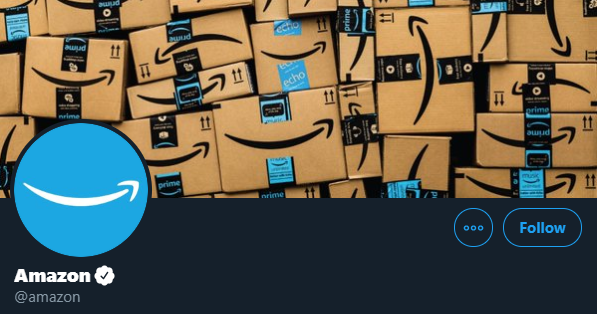 Do you remember the first time you got a box from Amazon? Amazon does, too. In fact, their Twitter header is a stack of Amazon boxes in all shapes and sizes. When you look closer, though, you won’t just see regular Amazon boxes. You can also see Amazon Music and Amazon Prime. It’s subtle advertising that capitalizes on a common branding strategy for all of Amazon’s services, which is why it works for us. Most Twitter cover photos use images to convey a message. The World Health Organization, on the other hand, uses text. Its Twitter header is a series of tips for reducing the risk of coronavirus infection, giving users useful information without making them scroll down right away. It’s not the prettiest cover photo around, but it delivers its message very effectively. Monday, is a project management software platform. The tagline of the company is “making teamwork click.” It’s placed nicely front and centre in the design of the Twitter header template. The use of bright contrasting colors makes the design engaging and eye catching. Nike’s “Just Do It” campaign might just be the three most powerful words in all of sports. With ad campaigns centered around some of the world’s greatest athletes, Nike has captured a large part of the market for sports apparel.

Nike’s Twitter header, the tagline “Just Do It” is on a black background. It takes on a more poignant meaning after the passing of one of the brand’s top ambassadors, NBA legend Kobe Bryant. Admit it, you’ve always wanted to be an astronaut. Who wouldn’t want to explore the moon, go on a spacewalk, and discover new worlds? It takes a lot of training to be an astronaut, which is why a lot of people give up on their dreams of space travel once they get old. NASA, though, doesn’t think it’s ever too late to become an Astronaut. It promotes its #BeAnAstronaut program on its Twitter header, giving people of all ages a chance to live their dreams again. Rebrandly, is a custom URL shortener. Their Twitter template cover features a cartoon character that has a passing resemblance to Clark Kent. Underneath his work shirt he’s wearing a Rebrandly t-shirt. The design takes a different approach to the other examples on this list. It just goes to show that you can make your design stand out regardless of the approach you take to branding.

These are just some of the most amazing twitter headers you can get inspiration from! Just remember that your online graphics like your twitter header adds up to how your viewers and prospects see your brand. It’s a piece of a puzzle that makes your entire brand stand out from the rest of your competitors.

If you’d love to create amazing twitter headers just like the samples on this post, feel free to checkout Youzign!
We’re offering a 14-day free test-drive for all our apps. Register here for free. Typography can be an intimidating subject for beginners but the moment you understand its basic principles you’ll realize how fun and interesting it can be. I had the privilege to tap into the creative minds of our design team at Youzign and gather useful tips on how to choose the right fonts for your projects,... Read more
GUIDES

If you’ve been youzigning for quite a while now, I’m pretty sure you’ve also experienced that magical moment the first time you got your hands on youzign’s magic wand – The Background Eraser tool! Being able to achieve an isolated image with a transparent background in just a few strokes of green and red, it... Read more